Of Life and Death: My Accident

Two days ago something happened. I didn't make a fuss about it because I wanted to be nice and protect someone from being scolded, Perhaps I shouldn't have. My family, some friends and I went away this weekend to Constanza, as always, it is our annual trip to feel the chilly weather we can only find in places like that here in our country. We stayed at a different place this year and it seemed so great. There were so many things to be done, among them was riding four-wheelers. My mom detests them, and I remember her always telling me all these tragic stories about people dying in horrific accidents while riding these things. This weekend her feelings about the idea were the same, but I had learned to ride one while in Atlanta so I was fixated with the idea of driving one this time. I was being disobedient, I confess, and I repented afterwards too. You see God puts authorities over us and whether they are Christian or not, as long as we are under their authority and as long it does not compromise us as Christians we must obey and/or submit to them.
While me and my sister's boyfriend, who was supposed to be supervising all of us (my sister, my cousin and I) because he's the expert using these things, were riding the wretched four-wheeler (I was driving it) we passed through an unsteady slightly narrow dirt road the four-wheeler began to behave strangely it would steer to the right on its own, and at one point while we were going really fast it began to steer right and instead of me turning to the left i turned to the right, the four-wheeler jumped the roadside ditch (don't ask me how, it shouldn't have done that even at the speed we were going) it landed on a piece of land that was being cultivated, we were thrown off of the ratty old thing and landed on the ground. I scraped my face, hurt my left hand somewhat badly, and got some nasty bruises on my leg. My sister's boyfriend had some minor cuts on his left hand and left ankle.
"My mother is going to kill me" is all I could think of, all he could think of was what my parents were going to tell him. I assured him not to worry I would take all the blame after all I was driving the thing. I told my parents what had happened in the most calmed voice I could and in the most "no-big-deal" tone I could. I realize now I shouldn't have. I wasted a perfect opportunity to preach the gospel to a boy that does not fear death, my sister's boyfriend, and to myparents.
Not only that but it made me realize that it could've been my sister or my cousin in that four-wheeler, what then? What if something worse had happened? I already know where I'm going but they don't.
Situations like these should make you ask yourself, if I were to die today where would I go? There is nothing more important than your eternal salvation. And i've got news for you, God's word says: "Or do you not know that the unrighteous will not inherit the kingdom of God? Do not be deceived: neither the sexually immoral, nor idolaters, nor adulterers, nor men who practice homosexuality, nor thieves, nor the greedy, nor drunkards, nor revilers, nor swindlers will inherit the kingdom of God." 1 Corinthians 6:9-10
And also: "But the fearful, and unbelieving, and the abominable, and murderers, and whoremongers, and sorcerers, and idolaters, and all liars, shall have their part in the lake which burneth with fire and brimstone: which is the second death." Revelations 21:8
Have you ever lied? stolen something regardless of its value? Lusted after someone? Disobeyed your parents? coveted? used God's name in vain/as a cuss word. Then by God's standard you are guilty of breaking His law, the Ten Commandments. You are guilty. And all who break God's law deserves the righteous punishment of eternity in hell. Like a criminal who has murdered someone or stolen something his/her righteous punishment is time in jail.
But God, infinitely Holy as He is also Loving, He came down to earth as a man, Jesus Christ of Nazareth, and at 33 years of age He died on a Cross to pay the penalty for our sins. He rose from the grave on the third day beating death. He died so that through His blood shed on the cross we might be washed clean of our sins and be forgiven, how are we saved? by recognizing that you have sinned against God, repenting of your sins, asking God in prayer to forgive you for what you have done and then putting your trust in Him. His word says that God will give you a new heart, and a new nature, you will no longer love sin but hate it and you'll desire to live a life that pleases Him and not the world.

"God shows his love for us in that while we were still sinners, Christ died for us." Romans 5:8

"For God so loved the world, that he gave his only begotten Son, that whosoever believeth in him should not perish, but have everlasting life.
For God sent not his Son into the world to condemn the world; but that the world through him might be saved.
He that believeth on him is not condemned: but he that believeth not is condemned already, because he hath not believed in the name of the only begotten Son of God.
And this is the condemnation, that light is come into the world, and men loved darkness rather than light, because their deeds were evil." John 3:16-19

So ask yourselves this question if you were to die tonight/today where would you go? Have YOU been forgiven yet?
Posted by Moon at Tuesday, January 22, 2008 No comments:

So today I was sitting outside the OR area?, in spanish its Pre-Parto (Pre-Labour?) waiting for surgeries to start at the hospital. While I waited I was looking for something I was writing on James and ways people have misquoted him so I opened my bible and began reading James. A young man sat beside me and asked me If I was a Christian, I looked up really quick and said yes and then continued reading, when I realized that this was a perfect opportunity to witness the young man stood up and left. I know, I know terrible...but I got a 2nd chance today to fish! I was at the beauty salon today because we're going to recording a scene, tonight after church, for the musical we're [a group of people from church, including youth and adults, its gonna be great God willing!] gonna present February 9th (Please pray for us and that this Musical will be honoring to God and hopefully reach families and specially the youth) anyways, I was on the hairdryer(?) and like always I opened my bible and started reading on genesis and while I was reading a lady sat beside me and asked me the same question the young man had asked me, only this time I seized the opportunity! She's catholic, like most people in my country. I shared the gospel with her, talked to her about my testimony and exposed some of the false teachings of the RCC which she oddly agreed were wrong. All in all, she promsied to read the book of John. 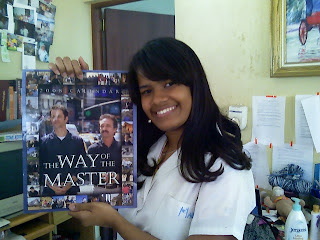 I went to pick up my way of the Master calendar today, it is just wonderful! I love the witnessing ideas and notes!! The quotes are great, the quality of the calender is super nice! It was well worth the money! Its actually mighty cheap!! So go get one if they still have left! :D

De Tapa a Tapa is the spanish expression for "from Cover to Cover", which is what i've begun doing this year with the Bible. I've started reading it once more and hopefully will finish reading it without any interruptions or delays God willing. From Genesis to Revelation. What a journey, just now I was remembering the first time I began to read the OT, wow I don't know about other people but It was such a delight for me to read about the begining of times, about God's character and nature and trying to understand Him each day. I felt like I was right beside Moses when he was leading the people out of Egypt, I felt like I was right there in the desert with them, going through Moses' frustrations and delighting in God's blessings toward His people, His discipline, His PATIENCE. People say that "oh the God of the OT is mean and vicious" etc, but as I read through the OT and as I tried to know God better I just couldn't see that, it just made me grow in my love toward God, and respect and reverence, toward the Great I am, El-Shaddai, the God who even though I did not deserve saving because wow what a wretch of a little girl I was, hung on a cross bore my sins faced God the Father's wrath, died and resurrected on the third day so that I could be justified before God and be declared righteous, all this by God's GRACE. What a Loving and Merciful and Just and Sovereign God He is!
Only this time I have not only been reading it (I use the bible Daily Walk Bible:"With 365 devotional helps that will guide you through the readding of the Bible in one year") I have been studying it using the following online bible comentaries: Matthew Henry's Commentary on the Whole Bible Unabridged and God Speaks to Abraham: An Easy English Bible version and Commentaryon Genesis chapters 12-24
God Bless,
Rita M.

PS: Thanks to my brother in Christ SouldeSaenz I can finally write all the notes I want on my bible now with the knowledge that it wont damage it because I bought me some pigment liners while in Miami, FL after my trip to Atlanta, GA.
Posted by Moon at Monday, January 07, 2008 2 comments: