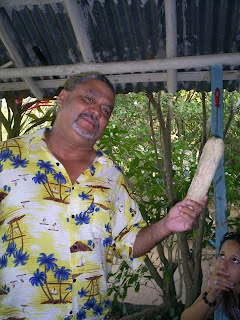 Loofah is a climbing vine related to gourds and cucumbers, and sometimes called the “dishrag vine,” a reference to the sponge-like qualities of the dried fruit. Six species are in the Luffa genus, and they are widely cultivated for food and sponge uses. The loofah is the only plant source of sponge, and it has been used in bathhouses and kitchens for centuries. Traditionally cultivated in India and the Middle East, where the name originates, loofah is also grown in other warm, dry regions.

In appearance, a loofah looks like a cucumber. The attractive trailing vines of the plant will take over any available surface, yielding drooping green fruit in the summer. Loofah vines are often used to cover decaying fences or as privacy foliage, because they are dense and fast growing. Loofah prefers warm, dry climates, and is very sensitive to frost, generally not thriving outside of USDA Zone 10 unless gardeners sprout indoors and keep a close eye on their young loofah plants. The plants need to be watered regularly, but should not be allowed to become waterlogged.

Loofah is harvested for food in many parts of Asia. All species of loofah are edible, but they must be consumed before they mature, or they will be too woody and fibrous to eat. Loofah is cooked before eating, and is sometimes seen on menus as “Chinese okra.” When allowed to mature and dry on the vine, loofah can be harvested as a sponge. The woody exterior skin is peeled away, and the seeds shaken out for reseeding. The loofah sponge can be sold whole, or chopped into smaller and more manageable portions. Loofah can also be compressed for shipping. The net of straw colored fibers will puff up again if the loofah is moistened.

Like other sponges, loofah will collect bacteria if it is kept moist and warm, an environment 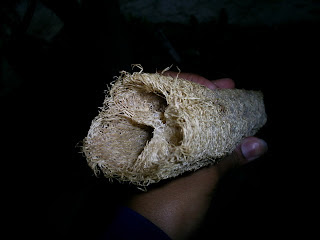 common to bathrooms. For this reason, many people incorporating loofah into their beauty regimen prefer to use it as a dry exfoliating brush before bathing, or to grind it and use it in exfoliating scrubs. As a dry brush, loofah will gently remove the surface layer of dead skin, leaving the skin smooth and conditioned. Loofah can be used as a body sponge in the shower, but it should be allowed to dry out between uses. In the kitchen, loofah makes a great abrasive sponge for removing stubborn food particles from dishes and counter tops. Loofah is also gentle enough to use on delicate things like coated cookware which cannot withstand normal abrasives.1

This is yet another fruit used very much in the old days and probably still today in some places for hygiene purposes and in the kitchen sink. Yet another wonderful creation of God.
Posted by Moon at Tuesday, March 25, 2008